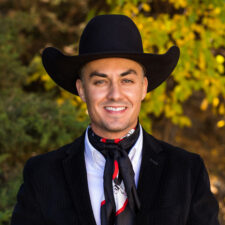 From Wyoming, To Texas, and Back To Wyoming, Andrew Joannides Named Wyoming Agriculture in the Classroom’s New Executive Director

Born and raised in Cheyenne, spending 10 years working in higher education and intercollegiate athletics around the country, Andrew Joannides is now back in Cheyenne and has joined the Wyoming Agriculture in the Classroom (WAIC) team as Executive Director on October 17, 2022.

Founded in 1985, the 501(c)(3) Non-Profit Wyoming Agriculture in the Classroom has worked tirelessly to develop curriculum to increase students’ understanding of Wyoming’s vast resources so that they become informed citizens capable of serving as stewards for Wyoming’s future. Through the Wyoming Stewardship Project, Bookmark & Beyond, Educator of the Year, and Educator Workshops and Courses, WAIC is helping build a future in which the interdependence of Wyoming’s people, agriculture, natural resources, and outdoor recreation and tourism is acknowledged and valued for the benefit of all our communities.

“I am fired up to get back home and to have the special opportunity to join and lead the WAIC team. I have been chomping at the bit to get back to my roots and it has been a dream of mine to help serve the young people of the great state of Wyoming. This organization plays a major role in the future of our state and I am grateful for the Board of Directors’ faith in hiring me and the team welcoming me with open arms,” says Joannides.

Prior to joining the WAIC team, Andrew served as the Executive Director of Annual Giving at Tarleton State University where he was a department head within Institutional Advancement(IA) and was responsible for all aspects of the annual fund, including annual fundraising for the College of Agriculture & Natural Resources and the 37x National Champion Tarleton Rodeo program. In Fiscal Year 2022, the IA team raised a record $17.3M million in overall giving while successfully completing a $100 million fundraising campaign. Andrew also served on multiple Leadership Teams.

Prior to Tarleton, Andrew completed 4.5 years of service with the Huskie Athletic Fund at Northern Illinois University where he was a department head and Assistant Athletic Director. Andrew also had prior stops at Arizona State University, University of Tennessee at Martin, University of Nevada Las Vegas, and the University of Wyoming.

Joe Evers, Wyoming Agriculture in the Classroom’s Board President says, “The Board of Directors is incredibly appreciative of Jessie Dafoe’s tremendous service and leadership at WAIC. What she has accomplished for the organization is nothing short of amazing. Jessie left big boots to fill, and we are excited to bring Andrew back to Wyoming to fill them. Andrew’s deep Wyoming roots and his professional background make him uniquely situated to take the reins. Andrew’s vision, passion, and energy will help WAIC write the next chapters.”

Making a difference
for Wyoming’s youth starts with you.

We’re working to ensure that future generations of our state’s leaders, critical thinkers, and problem solvers become stewards for our state—and it’s only with your support that we can make it happen!